While the business wants to maximize the profits, the ecologically-responsible consumers want to fight climate change. Here are 5 ways the blockchain can help with both.

While each human being is individual, many of our habits are common throughout the society, and can thus be categorized, studied, and even influenced to increase the socium productivity as a whole, referred to as the “swarm intelligence theory”. Stimulating the society to reach more efficient and productive behaviors is a dream of all economists and large market players, as it helps them maximize their profits or minimize their expenses. This can be done using the blockchain technology, where every interaction stored in the decentralized database is final and transparent to all the network participants.

Just for example, the sewage processing plants in the US and the UK are built using similar technology and are based on the AD — the anaerobic digestion process, carried out by bacteria that produce methane out of biological waste. However, the yields of the US plants were around 50% lower as compared to their British analogs working under similar load conditions. The research from Kleenex has shown this to be due to the fact the Americans use abundant quantities of 4-layer toilet paper, while the Englishmen suffice with quite a few sheets of 2-layer paper.

This leads to the US wastewaters carrying up to 10 times more cellulose, as compared to their UK analogs, thus resulting in much trouble for the bacteria and significantly worse methane production. Multiple blockchain solutions were proposed — from producing easily-dissolvable toilet paper (which happened to be not feasible) all the way up to direct legislation that resulted with the requests to throw toilet paper into the garbage cans in public places.

One of the best results, however, was achieved by Kimberly Clark, the manufacturer of toilet accessories. They moved from freely-rolling toilet paper dispensers to clipping devices that limit the amount of paper given per 1 visitor of a public toilet. Such simple solution resulted in a significant boost of income for waste processing companies, as it dramatically improved the output of methane from the AD factories, while also making public toilets more cost-efficient.

Another example of using the swarm theory in combination with high technologies can be seen in the decrease of average household energy consumption levels in the US and the UK, despite the growth of the numbers of various energy-consuming gadgets and home appliances. For example, a decade ago the ending of the episode of any popular sitcom or soap opera would result in huge spike or electricity usage, up to 650 MW at times, as millions of people rushed to switch on their kettles or coffee machines and make some tea or coffee.

Nowadays, this energy spike is only about 200 MW at best. Why so? Because many viewers have adopted time-shifted viewing to watch the show at their free time, or record it and view it on their mobile devices while they commute. As these devices are usually charged overnight, total energy consumption is blurred over many hours, lowering the strain on the energy grid.

Yet another example of applying the swarm theory to drive revenues would be the experience of Air Liquide, a US manufacturer and operator of various gases for medical and chemical industries, like hydrogen and nitrogen. The company has several gas-generating facilities and operates a network of gas lines and a fleet of more than 400 trucks to deliver the gas to their consumers. When the business grew, operating the system was becoming more and more complicated, which began to cause delays in delivery.

Air Liquide adopted the system inspired by the collective mind of ants, who use pheromones to inform their hive of the whereabouts of food and the best approaches to get to it. The company hired a Big Data and AI solutions firm to design a data analytics system that processes millions of reports of the ready product stocks, placed orders, free lorries, available routes, and weather conditions along the way.

Thus said, each morning every truck driver receives a plan for daily movements, which sometimes forces them to drive for hundreds of miles, instead of choosing the shortest route themselves. Such approach removed the delays and allowed Air Liquide to utilize their assets with utmost efficiency, thus driving in millions of additional profit.

Adding the blockchain technology into the mix allows empowering the swarm theory manyfold. We have already told of a few of blockchain applications in the European energy sector, land registry, and real estate trading. Much more initiatives are underway around the world, like the New York P2P energy market pilot, or several more energy market-related projects in Europe.

Applying these tools would allow minimizing the expenses on energy production and distribution, but there are still more possibilities of leveraging the blockchain power in multiple industries to fight the climate change: 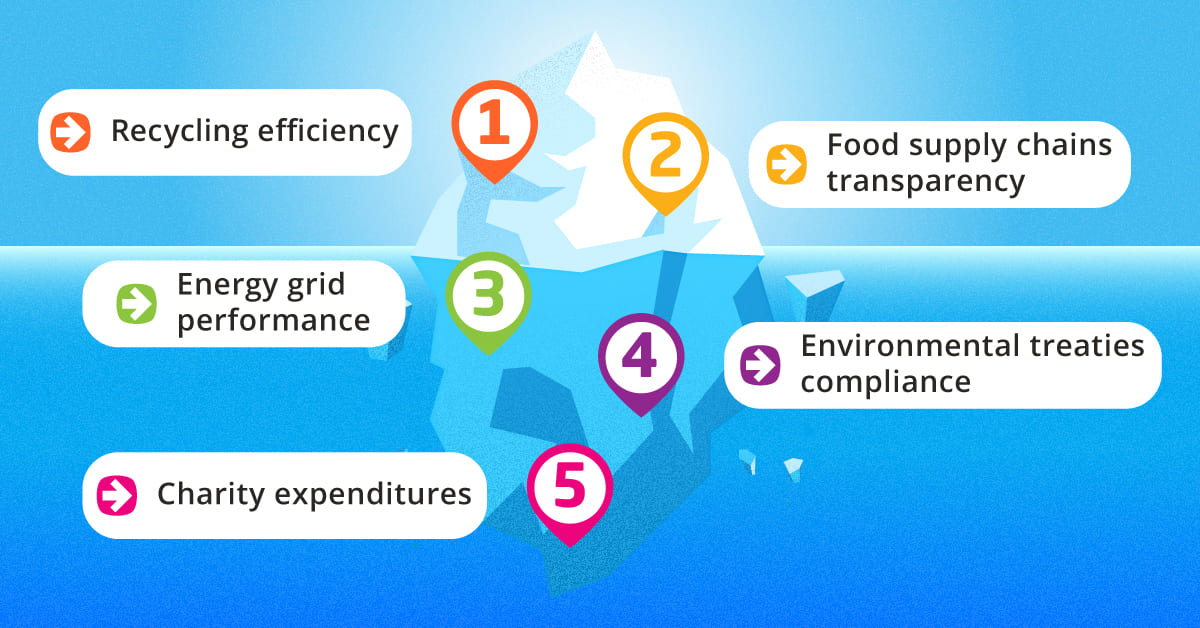 We’ll explain each of these points in more detail below.

Using the blockchain technology to bolster the recycling efficiency

Despite all the legislation and fees on inefficient recycling, there are quite little incentives for well-planned recycling, so each city has to work out what’s best for them on their own. Should the recycling results be recorded with blockchain contracts, every network participant would be able to measure the result of every waste recycling initiative and adopt the best practices.

There are several waste-recycling programs on blockchain like RecycleToCoin or Plastic Bank already running across Europe. The former accepts plastic bottles to special machines across Europe, while the latter issues monetary rewards, cell phone charging or even cooking fuels for deposits of plastic waste in the third world countries.

Counterfeit food products are the scourge of the supermarket shelves across the world. There are so many intermediates between the food producer and the end buyer that ensuring the product genuity is nearly impossible. A certain effort was made to ensure the product validity through the excise stamps, yet these can be forged too.

IBM launched the blockchain-based food safety program in China last December and some efforts are in place to replace the faulty excise stamps with QR-codes maintained by a blockchain system. This will help reduce the amount of food fraud, the carbon footprint of food production, processing and delivery, and the expenses on ensuring the genuity of multiple food produce.

P2P energy grid with the blockchain

We have already mentioned multiple energy-related initiatives being developed or already powered by the blockchain technology. The point is that if each member of the community is able to produce enough energy to power their own household and trade this energy with their neighbors through a P2P grid, the costly-to-build and maintain country-wide electric power lines become obsolete.

Despite signing the Paris climate agreement aimed to reduce the carbon emissions, many companies find it easier (and cheaper) to tamper with the reports than to actually implement eco-friendly technologies and upgrade their existing facilities.

Thus said, building the ledger of records on blockchain would prevent the cases of fraud and forgery of environmental reports and result in a more transparent and cost-efficient management of these records (as nearly $1 billion is spent annually to maintain the Paris Agreement record database).

Charity funds control with the blockchain

The same reasoning stands for introducing the blockchain ledger to the charity domain, as many corporations use it as a cover for their financial dipsy doodles. Many charity funds have turned into colossal money laundering machines with inefficient management and are quite slow to respond to the pressing needs of the community.

Forcing the charity to accept blockchain-based ledger of transactions would ensure transparency of such payments and greatly reduce the bureaucratic overhead of moving the funds from people with generous hearts to the people in need. In terms of fighting the climate change, the money intended for rewarding the eco-preserving activities can be delivered on reaching certain waypoints exactly to the parties involved, omitting multiple unintended bureaucratic pockets.

We live at the beginning of a new millennium, and relying on old and trusted ways just doesn’t work anymore. The nature-preserving and technologically-aware Millennials demand transparency, eco-friendliness and environmental responsibility from their food and utility providers. If the governmental agencies fail to deliver the solutions required, the swarm intellect moves the society in the needed direction, sometimes undermining the fields where the state has traditionally dominated.

The blockchain technology is a powerful tool that helps bring the power to the people, as it allows them to build trustless, decentralized and truly democratic systems without any regulatory organs or centralized authorities. This helps disrupt and innovate in a multitude of industries, including the ones that influence the climate change directly, like energy production, food processing, and waste recycling. Should you have a suggestion on how to solve any challenge using a blockchain technology — reach out to us, we would be glad to help!