Best practices of implementing DevOps in the banking industry

The banking industry has invested billions of dollars across the last 2-3 decades into their IT infrastructure in order to be able to support the rapidly-changing preferences of their customers.

Mobile apps for the younger generations like Millennials or Gen Z, web apps for Gen X, who are mostly not into mobile apps, live support centers for Baby Boomers with 2nd and 3rd line of admins dealing with mainframe infrastructure underneath — all of this has to work coherently and interact flawlessly with each other. Now, it is time for adopting DevOps in the banking industry, in order to be prepared for the future. Is your bank ready?

Current problems with software development in the banking industry

As of today, most of the retail and investment banks and other financial services companies have a somewhat outdated approach to the development and operations of their software. The banks must be secure, and in many cases, this is achieved through strict control of the software development lifecycle and working according to the Waterfall software delivery model. This includes rigid technical requirements, lengthy development process with multiple approvals between stages, long-term testing and infrequent product updates — everything to emphasize operational stability and security, yes?

However, most of the banks witness the direct opposite outcome:

Sounds like a nightmare, eh? Or is it a normal operational routine in your bank? However, banks and financial companies actually have some very strong points that can be their stepping stones to DevOps workflows and Continuous Delivery best practices. 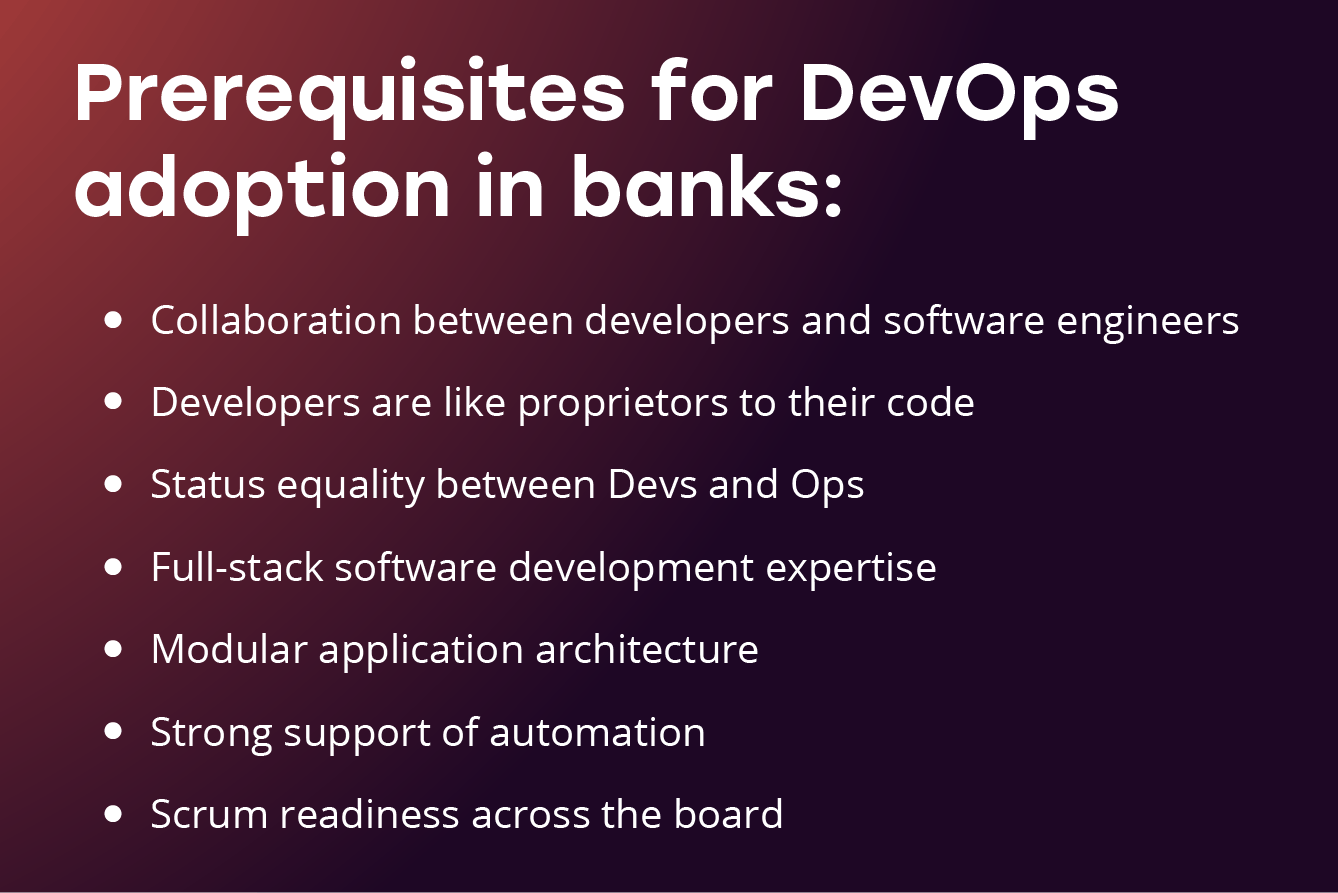 Prerequisites for DevOps adoption in banks

There are several important traits of the software delivery lifecycle that can make the DevOps adoption in banking industry much easier:

Thus said, even if the IT departments in banks operate in an outdated way, they have all the prerequisites to undergo the successful digital transformation. It can be safely assumed that by now every bank understands the need to move from an unpredictable and highly volatile legacy software development routines and systems to a more stable, reliable and cost-efficient mode of operations. In other words, they need to move to DevOps. 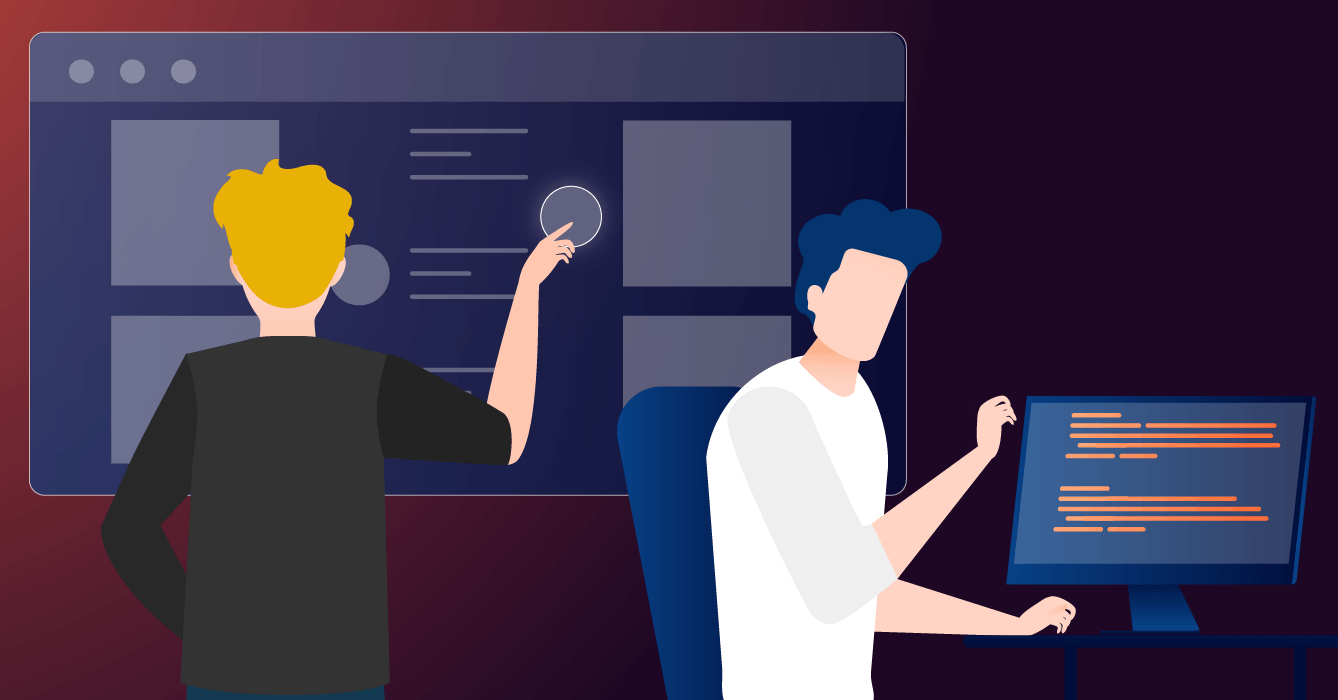 The DevOps best practices and founding principles are the culture of collaboration between cross-functional teams of Devs and Ops engineers, working with virtualized servers to operate the Infrastructure as Code, developing the code in short batches to provide Continuous Integration of feedback and use the automation tools to ensure Continuous Delivery of new code to production without disrupting its normal operation.

As you can see, this process has much in common with the best practices and procedures that are already in place in the banking industry. Therefore, all the bank or financial company needs is the external help with organizing the digital transformation and teaching their teams to work according to DevOps best practices. This help might come in two forms: ordering DevOps-as-a-Service from a Managed Services Provider (MSP), or hiring their DevOps experts to build an internal Center of Excellence. We cover each DevOps approach with their flaws and benefits below.

DevOps explained by a transition project

If a company wants to get the things done, an external DevOps team can step in and deliver the required DevOps expertise.

Thus said, your internal IT department will receive the ready cloud-based system with configured CI/CD pipelines, fault tolerance, auto-scaling and transparent monitoring options, along with all the developer documentation required to run it. In the process of such a DevOps adoption, they will learn to work according to DevOps culture, becoming more productive and spending fewer resources on repetitive actions.

Seems too good to be true? What are the fallbacks of this DevOps approach?

Thus said, this does not mean the directors of banks and financial organizations will not be able to execute their control over the software development process. It only means there will be as little choke points along the software delivery pipeline, as possible.

DevOps adoption through a Center of Excellence

As most of the banks are not yet ready to entrust their digital transformation to an IT outsourcing company, no matter how trustworthy and reputable, the second way to perform a transition to DevOps is through training an internal team.

In this case, the roadmap is the same, but there is an initial stage, where the external DevOps specialists help the in-house IT department to master the DevOps tools, workflows and best practices. This takes longer, costs more and will require running several pilots, but will help form a nucleus of DevOps culture within the banks or financial organizations, which will serve as a group of visionaries and facilitators, helping the rest of the team to make the transition.

This will lead to de-siloing of responsibilities and forming cross-functional teams without letting the outsiders close to your mission-critical infrastructure.

There are certain drawbacks of this approach, however: 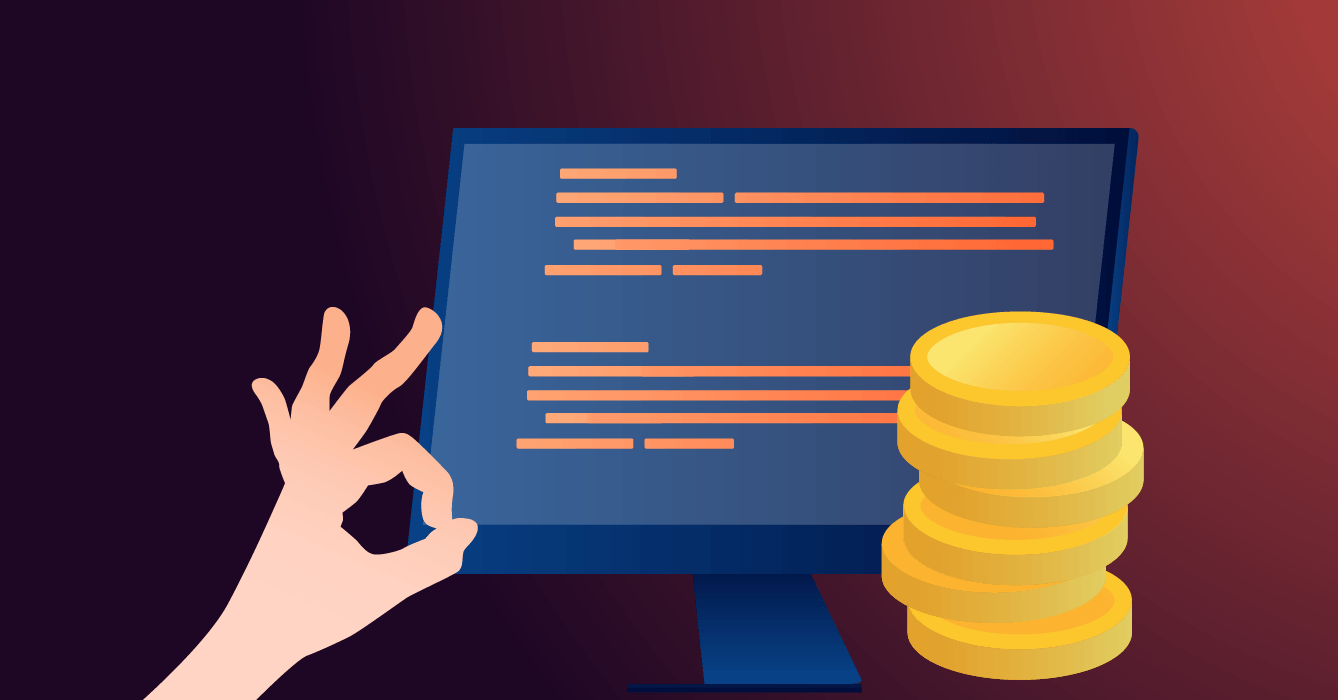 Whichever approach your bank selects, you will be able to perform a DevOps transformation of your banking infrastructure. Therefore, you can either use the help of a trustworthy MSP chosen among the leaders of the IT outsourcing industry based on the replies of their customers to deliver the whole digital transformation project or use their expertise only to provide the initial training your in-house specialists to do the job on their own.