Docker and Kubernetes: till death do us part

There was an official update in the Docker blog, informing the community that Docker now provides native Kubernetes support. While this is definitely great news for the community, we will elaborate on the fact a bit more. 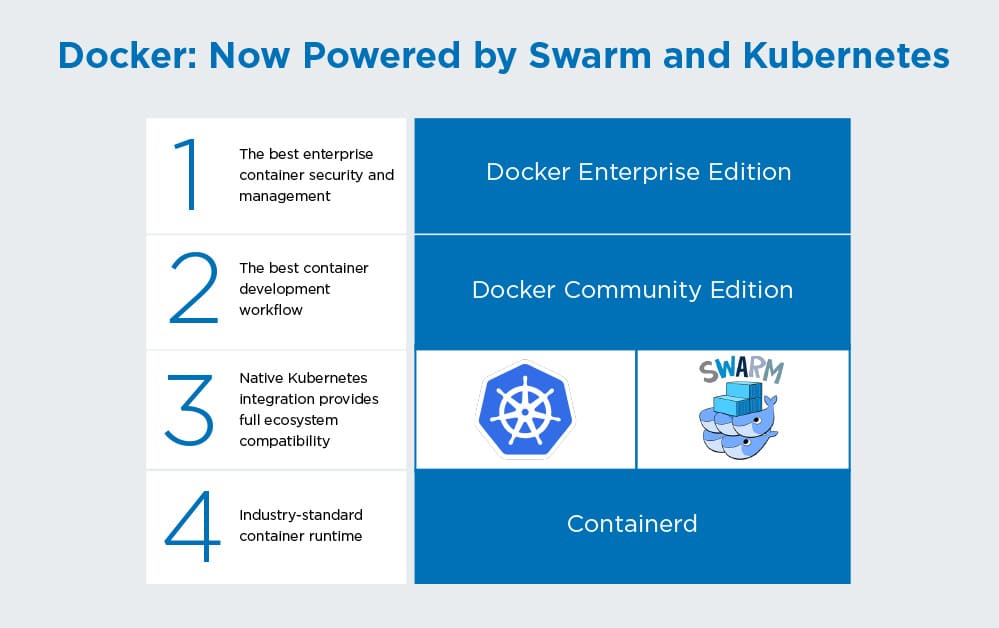 While Docker EE was originally packed with Docker Swarm as the means for container orchestration, the platform was built with interchangeability in mind from the get-go. Thus said, if a DevOps team needed certain features Docker Swarm lacked or had another configuration orchestration tool deeply integrated into their system, they were always free to use Kubernetes or any other tool of their choice.

The latter option required some intense work on configuring Kubernetes, however. While totally doable, this was quite a time-consuming task requiring allocation of significant resources. With the addition of fully-integrated Kubernetes support out-of-the-box, the DevOps teams will have this integration work done for them.

Benefits of Docker integration with Kubernetes

Here are some additional benefits of Docker Enterprise Edition integration with Kubernetes:

Docker platform and Kubernetes are both written using the same language, have quite a ton of overlapping parts and their communities share the same vision of software development and delivery process. This integration is a significant milestone in a Moby project aimed at further making the containers and the tools for container orchestration even more simple to use and powerful.

The new Docker version with vanilla Kubernetes is still going through testing and will be publicly available later this year. Both Docker EE and Docker CE for MAC and Windows will include the updated components. To receive the updates (and maybe even lay your hands on the thing), feel free to subscribe to the Docker beta.

Are you as excited as we are? Share the word with your friends and colleagues!