While many bright talents have joined the tech community quite recently, a large portion of IT industry professionals clearly remembers the times when Software Development and Internet Operations were two separate silos

(and it is still so in many giants of enterprise business). However, the appearance of Agile methodology in general and DevOps model of its realization in particular, changed the landscape for all the parties involved: the IT specialists, the businesses and the customers. This article will explore the 3 ways DevOps paradigm changes the IT world we live in.

DevOps has different meaning for different people, so we’ll try to define it the way we see it.

DevOps is the approach to software development and delivery, which employs cross-functional teams of developers, Internet operations engineers and QA specialists in the full cycle of software development, automated quality assurance, streamlined deployment and ongoing maintenanc 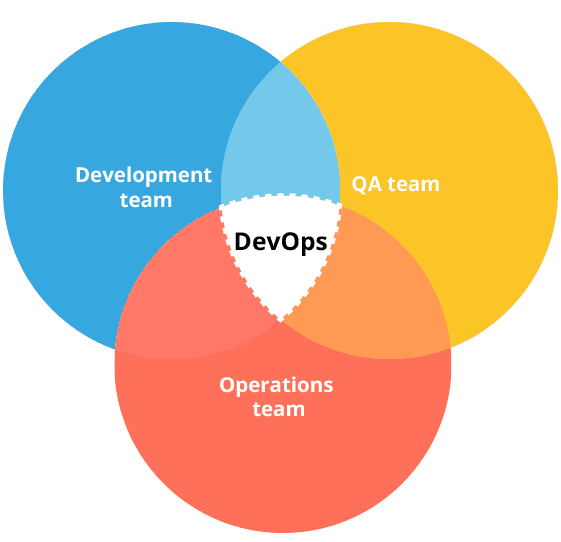 This might seem simple at first, yet it disrupted the industry upside down, opened immense possibilities for startups and forced all market players to face a hard decision: adopt the DevOps model or lose the competitive edge. Why so?

The software products were mostly proprietary and were updated in big batches or releases, following some schedule. Thus said, Dev and Ops teams had quite different and often directly opposite goals, as the developers wanted to implement more features, while the ops team wanted uninterrupted operations and the QA team had to test every update extensively (and hotfixes were still a thing as some bugs still managed to slip through the testing to be discovered by the customers).

The customers had to wait for the next release in hope to receive the features they would like to have in the product, and the business owners had to keep the balance between keeping the product up-to-date and competitive – and delivering a well-written and tested software. This situation posed lots of risks to all parties involved:

The introduction of DevOps paradigm changed this situation drastically.

DevOps changes for IT specialists

Following the DevOps model, every member of the team takes part in writing the code, testing it and committing the ready units to form a build, which is then published into production and maintained after the release. Thus said, each member of the team is responsible for various stages of the software development pipeline and can apply effort where it is needed most. As automated tests are in place, unit testing of the new code helps cut down the time on bug fixing. This ensures stable flow of commits and quick deployment of new product builds.

DevOps changes for the customers

Due to regular influx of new software builds, customer experience changed drastically. Feedback loops become quite shorter and the features requested are added within weeks, not months or years, as well as bugs found are corrected quite fast. And if the app of choice fails to deliver the value expected – well, uninstalling it and installing another one from an app store takes a few minutes only.

DevOps changes for the business

DevOps impact is felt the most in the business, as the overhaul of the software delivery pipeline forces the whole company to change its business practices. Removing the silos of separate tools and responsibilities, cross-training the DevOps and QA teams for better collaboration, drastic reduction of operations overhead — all of this leads to much faster product delivery cycles, shorter task completion spans, much more efficient resource utilization and increase of productivity overall.

Many businesses dropped the separate support desks for software development and maintenance, reorganized their business processes and optimized the team sizes to better staff the new operations model. Some reports state embracing the DevOps software development model allowed for up to 40x faster commits, 80% customer satisfaction growth, 380x shorter feedback implementation loops and numerous other benefits. This is a major game changer for the businesses of all size, forcing both startups and international enterprises adopt this approach.

How to implement DevOps culture in your organization then? One of the best ways would be devoting a certain amount of time (no less than ⅕ or even more of the work week) to cross-training the other team members in order for the whole team to become used to working with the full range of must-have DevOps tools and following the same work practices. While this can take a significant amount of time and effort, it is literally the only way to increase the business value of the process, empower passion and excitement of the team and ensure smooth transition of skills and knowledge between the team members

The other variant would be hiring a subcontractor DevOps team to ensure timely delivery of pitch-perfect software and its stable maintenance and evolvement. ItSvit is proud to possess such a team and always stands ready to help our customers reach their goals. Contact us and experience all the benefits of continuous integration, testing and delivery of your app